The co-expression of HER2 and EGFR L858R in a solitary nodule removed from the lung, whose mutation was not confirmed by molecular techniques, made us think about the possible existence of a cross-reaction between HER2 and the EGFR L858R-specific antibody. Our study was designed to further analyze the existence of this cross-reaction and stress the need to exclude a metastatic breast cancer when dealing with EGFR L858R positive cases.

Conclusions: The EGFR L858R antibody gives false positive results in most of the breast carcinomas with HER2 overexpression/amplification. As a consequence, it is essential to confirm any EGFR L858R positive cases by molecular methods or at least discard the presence of HER2 overexpression/amplification before rendering a diagnosis. It is also important to consider that HER2 has been described in other carcinomas as urothelial, gastric or ovarian, as well as lung although infrequently.

Lung cancer is the most common cause of cancer worldwide. Its significant impact on the population has made it the focus of a large number of clinical trials, many of which with therapies designed to block the tyrosine kynase activity of epidermal growth factor receptor (EGFR). One of the most common subtypes of lung cancer is adenocarcinoma which has been recently reclassified by consensus [1] given the importance of rendering a proper diagnose in order to assist the patient, determine therapy and predict outcome.

Several publications have shown the association between presence of EGFR mutations and the enhanced sensitivity to tyrosine kinase inhibitors (TKIs) therapy, as well as the higher incidence of these mutations in adenocarcinomas, in especially lepidic variant, which are more frequent in Asiatic, never smoker women [2-4].

Different EGFR mutations have been associated with sensitivity or resistance to treatment with TKIs. The most prevalent (delE746_A750 in exon 19 and L858R in exon 21) together represent about 85% to 90% of EGFR mutations as found in the literature [5]. Lately, two monoclonal antibodies and high-sensitivity techniques have been introduced to analyze its status.

The lung is the major metastatic site for breast cancer. Although in some cases may be difficult to make a clear-cut differential diagnosis between them, especially in poorly differentiated solitary lung tumors, distinguishing primary lung carcinoma from metastatic breast carcinoma is essential to treat patients adequately [6]. While making a differential diagnosis of a solitary lung nodule in a patient with a history of breast cancer we found a concomitant positivity for EGFR L858R and HER2 by IHC. Other positive antibodies were CEA, CK7, GCDFP-15 and Mammaglobine, and the case was negative for CK20, TTF-1, estrogen receptors and progesterone receptors (Figure 1). The mutational studies by real-time PCR did not confirm the presence of EGFR L858R mutation. We concluded that it was a metastatic breast cancer nodule with an unexpected positivity with EGFR L858R antibody.

The aim of this study was to verify the existence of cross-reaction between the HER2 protein and the EGFR L858R mutation-specific monoclonal antibody (clone 43B2) and stress the need to establish an accurate diagnosis previous to the use of these antibodies, recommended as a screening tool for treatment. 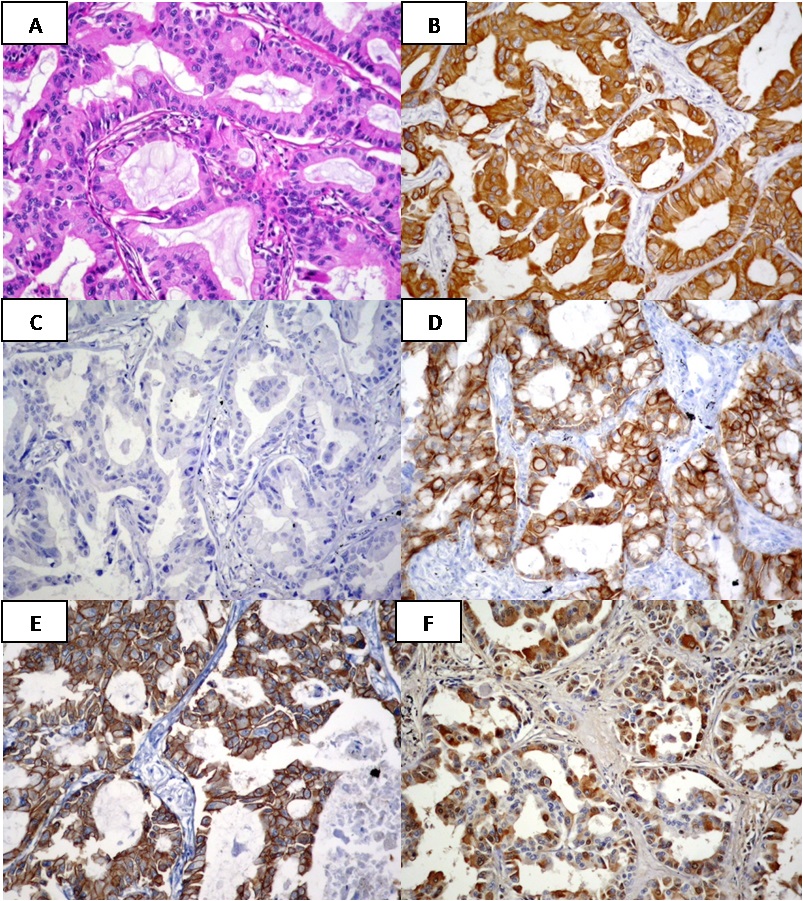 The series consists of 42 primary breast cancers classified by microscopic studies from a cohort of breast cancer prospectively studied in Histopat Laboratories (Barcelona, Spain). Hematoxylin and eosin-stained sections were reviewed by two pathologists.

All patients provided their written informed consent for participation in correlative science studies.

The series included 22 consecutive cases positive for both techniques (score 3+, defined as uniform, intense membrane staining of >30% of invasive tumor cells for IHC and showing a HER2/CEP17 ratio of more than 2.2 for FISH) and 20 consecutive cases negative for both techniques (negative, score 0 (not staining) for IHC and showing a ratio of less than 1.8 for FISH).

Genomic DNA was extracted from ten 5-μm-thick sections of tumor samples by macrodissection of selected areas followed by purification with QIAamp DNA FFPE tissue kit on an automated QIAcube (Qiagen). Mutational status of cases with positive or equivocal IHC were studied by the real-time PCR kit Therascreen EGFR PCR (Qiagen), a highly sensitive technique that allows the detection of 29 specific EGFR mutations including L858R in exon 21 and E746_750del in exon 19.

IHC for the deletion of exon 19 was negative in 42 of the 42 cases studied (100%). No significant differences were found between HER2 negative and HER2 positive groups (P-value=1.000)

Results are summarized in table 2. 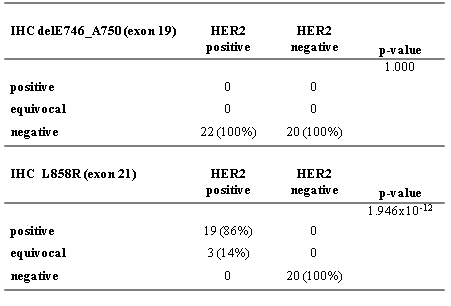 Figure 3: Therascreen results showing: (A) absence of L858R EGFR mutation and (B) valid internal control of the same reaction.

The EGFR is the founding member of the ErbB family of four structurally related tyrosine kinase receptors whose aberrant activity is implicated in a variety of cancers [7-8]. In humans this family includes HER1 (EGFR, ErbB1), HER2 (Neu, ErbB2), HER3 (ErbB3), and HER4 (ErbB4).

ErbB receptors are made up of an extracellular region or ectodomain that contains approximately 620 amino acids, with four domains responsible for ligand binding, a single transmembrane-spanning region, and around 500-residue-long intracellular region with the most conserved tyrosine kinase domain, followed by a less conserved regulatory tail at the C-terminal end of the protein.

The CB11 monoclonal antibody was generated to a synthetic peptide sequence corresponding to a site of predicted antigenicity near the C-terminus of the internal domain of the HER2 protein [9].

The exon 19 deletion mutations at codons 746 to 750 (E746-A750 deletion), together with the substitution of leucine 858 by arginine (single-point substitution mutation L858R) in exon 21, are the most common genetic changes present in the tyrosine kinase (TK) domain of the EGFR gene, near the C-terminus too.

Our hypothesis is that, the antibody generated against the L858R specific mutation recognizes a quite similar epitope to that usually detected by the CB11 antibody, giving a false positive when the tumor has HER2 overexpression.

In both cases we are talking about epitopes encoded by regions close to the C-terminal end which, as we have pointed out, is a region that is quite conserved among different members of the erbB family.

In a recently published paper, Wen et al [10] discusses the issue of EGFR-mutation specific antibodies as an additional tool distinguishing primary versus metastatic carcinomas in the lung. They found an 1% of cross-reactivity in HER2-expressing breast cancer among other cancer subtypes, two out of 17 cases HER2 positive breast cancer showed EGFR L858R moderate membranous staining, and 4 out 17 cases HER2 positive showed EGFR L858R faint cytoplasmic staining in >10% of tumor cells, considered negative by the authors.

Is important to note that in this paper neither HER2 IHC method nor evaluation system used were specified. In our experience, the expression of EGFR L858R is not always diffuse; this may explain the difference with our results as their study was based on tissue microarrays.

In any case, we are aware that will require a more extensive series to establish the degree of involvement by the cross-reaction.

Although inferior to molecular genetic analysis of the EGFR gene, several publications consider IHC highly specific and sensitive for the targeted EGFR mutations and therefore likely to be of clinical value in cases with limited tumor material, or in situations where molecular genetic analysis is not readily available [11-13]. It is precisely in these situations, especially when we have limited material, where the risk of giving a false positive result is greater if, previously, we have not been able to establish a clear diagnosis of the biopsy and exclude the possibility of metastatic cancer. The use of a suitable panel of antibodies becomes critical. For instance, as an example to discard breast origin, we cannot simply use hormone receptors as unique markers for the identification of the source, as it must be kept in mind the existence of breast tumors with both receptors negative. It is important to add to the panel other breast specific antibodies such as GCDFP-15, Mammaglobine or GATA-3 [14-18], as well as lung specific antibodies like TTF-1 [18].

It is also important to note that HER2 overexpression/amplification has also been described in other carcinomas (urothelial [19-20], gastric [21-22], ovarian [23]) as well as lung [24], although infrequently.

The current study reveals a possible cross-reactivity between the EGFR L858R (clone 43B2) mutation-specific antibody and HER2 in breast cancer cases showing HER2 overexpression and amplification, which should be kept in mind and further increases the need to reach a definite diagnosis prior to the use of this antibody.

Preliminary results from this article were published as a poster presentation at the 103rd Annual Meeting of the United States and Canadian Academy of Pathology (San Diego, CA, USA, March 2014).

Detection of ALK and ROS1 rearrangements using Next Generation Sequencing in lung cancer patients: comparison between FISH, IHC and NGS.

Molecular profiling of lung and colorectal cancer: added value of Next Generation Sequencing.

The grade group in the new grading system for prostate carcinoma could be predicted by the PCA3 urine test.

KRAS, NRAS and BRAF  mutation profiling in a series  of 90 metastasic colorectal cancer spanish patients. An estimation of cost savings.

Highly sensitive real-time PCR for the detection of  EGFR mutations in lung adenocarcinoma.